Few month ago I've posted a link to a brief note about 'Fractal Organizations' where Salim Ismail from Singularity University writes for WIRED 'Death of the Corporation – Rise of Exponential Organizations'. Fractal effect for organization's growth we've discovered in GameChangers Program - our top students and alumni start their own research&education programs (including User Experience Track and Data Mining Labs). The mechanics behind is that our participants like approach, values and formats that are GameChangers's core and take them in their own ventures in areas and topics that they are intersted in to learn and get real world expereince.

That small re-post and comments attracted Oleg Stepanov, CEO at JetBrains. He asked what if I do a reasearch about organizational design in fast growing companies known for their advanced culture like Google, GitHub and Yandex. I accepted Oleg's request as for the last 7 years I acted mostly as manager and entrepreneur and switch to a researcher role for a couple of weeks was a delicious opportunity. We've described the research as follows and I've started interviews and Quora/GlassDoor investigations.

Here are just few findings:
1. There are companies that work a lot to oureach their org design and culture. Valve is known for thier New Employee Handbook and open allocattion combined with flat organizational structure, Zappos supports dedicated web site, GitHub gain attention to its open-source collaboration nature. Google tells stories about its culture via own events and media (e.g. ZeitGeist Partners Conference, Think With Google) as well top US magazine and newspapers (Forbes, New York Times).

2. Google has plenty of traditional tools from multi-nationals' best practices but implements them with more concious attitude. While its belief in fast decisions and strong core values supported with tools such as OKRs (Objectives and Key Results - planning aproach invented in Intel, for the Russian text about OKRs see my article at Slon.ru)

and groups such as People and Innovation Lab makes Google significantly ahead of any other high tech mammoth.

3. Yandex looks very unmature comparing with any international IT/Internet company, meanwhile they have powerful tools and practices (e.g. sort of ant's colony trophallaxis mentioned in the Yandex.book) that are worth to learn from and keep the company as an employee with outstanding culture (at least within the Russian scene).

4. There's a consulting company that does org design/culture transfer from hightech agile organizations to the rest of the World - Undercurrent. They developed a model that summarizes a common features for such agile and values driven organizations. 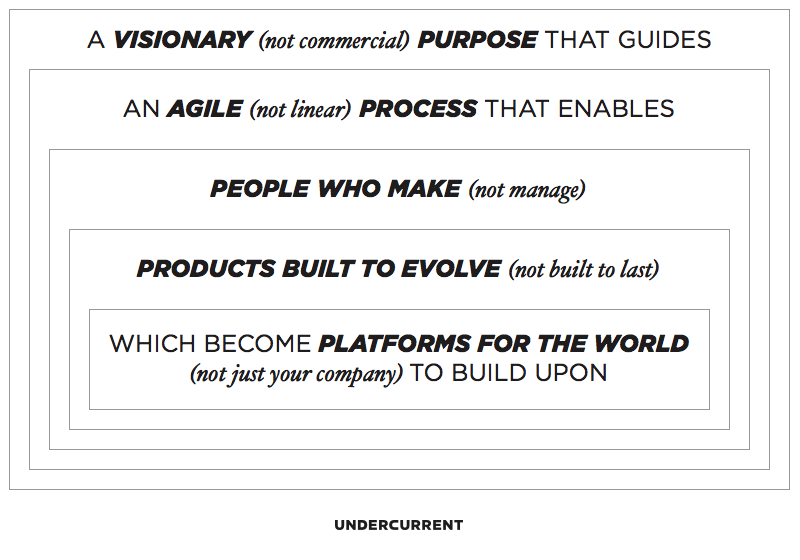 5. Hiring is one of the most important is such companies. E.g. Valve is hiring only mature people and people from its community. Google develops and continuously updates their hiring approach and Googles's profile. One of the most strong examples in hiring is Palantir co-founded by Peter Thiel - just look at their culture & hiring page.

6. Flat and/or no-manager companies is more about buzzwords then real essence. Valve hires people who in other organizations will be team/department leads. Valve is infact leaders only organization. Picture and quotation from its 'Handbook for New Employees': 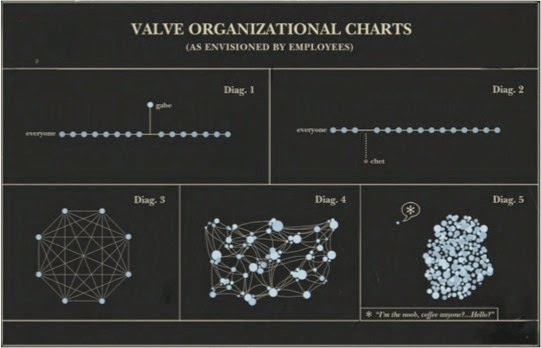 Any time you interview a potential hire, you need to ask yourself ... if they’re capable of literally running this company, because they will be.

It's also becomes visible if we compare it's revenue per employee with other IT companies. E.g. Yandex has 1 Bln and ~6000 employees, Valve - about 2 Bln and ~500 employees (estimations for 2013 year).


I don’t think about [GitHub’s structure] as being “flat.” I think about it is as being highly networked. And that means that instead of everyone being the same, you embrace that everyone is different, and you look at the strength of connections between people, the communication channels, and how information travels amongst them, and then you can draw a diagram. Instead of saying “Okay, everybody’s the same, here’s the org-chart, it’s just a flat line,” you say the org-chart really looks like a neural network, where you have nodes in a graph and then connections between them, and they go everywhere

Google also tryed to be flat, and in terms of information flows and decision making they achieved a lot while internal research showed that managers are really important for the company - if managers behave like this (click the picture to zoom in).

8. All-hands meetings are powerful tools if an initiative starts with founders and key decision makers. Here's my article: “How IT Companies Share News with their Employees“, Slon.ru Magazine, in Russian.

9. To discover corporate insideouts there are excellent tools beyound 'just search'. Qoura helps to find answers for 'What makes someone a great product manager at Google?' or even official statements like "What do economists do at Google (their responsibilities as Google's employees)?", Yandex guys are also there and answer a lot. Wolfram Alpha shows correlations between company's revenue and e.g. a number of employees http://www.wolframalpha.com/input/?i=google+revenue+number+of+employees


10. Ogranizational design tools can be very usefull not only for companies - startups, universities, governments, cities will signifantly benefit if they learn from these organiztions.

For the Russian page about the research and corresponging seminars please see the tbd2 site.
at 4:13 pm