October 7th and 8th
I visited the QCamp Conference. Event was organized by NRU ITMO and business incubator QD within the framework of 'Best Agers in Baltic Sea Region' Program and took place in Repino, a resort near St. Peterburg.

The idea behind QCamp is to stimulate creative collisions between all the participants which represented different geoagraphy regions: BSR countries (Sweden, Polland, Latvia Lithuania), Germany and Russia, as well as different generations: students, best agers (55+ age groups) and those who are in the middle.

The first day was ignited with a 'Romashka' round directed by Philipp Guzenuk - 'Romashka' - is a kind of intensive speed-dating format for start-up teams and experts. Students (ITMO, Faculty of Entrepreneurship) presented their projects to a new bunch of experts every 15 minutes. The second day was scheduled with 3 thematic round tables and a reflection session by Marina Sukhorukova and Victor Valdman.

As one of the greatest impressions: ITMO is very apt in indentifying demand for master program in technology entrepreneurship. Faculty of Entrepreneurship just opened in 2010 attracted really bright and proactive stundents. The first group is 25 students, some of them already have their own businesses, others are with projects in pre-incubation phase.

And what about Zeppelins? Just look at the photo. That's a materialization of one of the student projects. 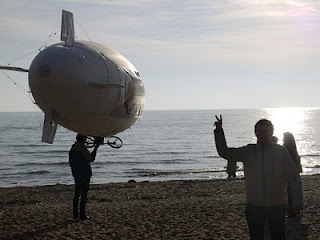